UK Rents Rising at The Fastest Pace in 13 years

UK Rents Rising at The Fastest Pace in 13 years

According to Zoopla’s UK Rental Market Report, rents are rising at the fastest pace since 2008 with demand outstripping supply.

Zoopla reported that private sector rents in September were 4.6% higher than those in 2020 at £968pcm. This growth marks the strongest growth in 13 years.

In the UK, excluding London, rents rose by 6% annually – a figure that marks a 14-year high. More specifically, rents in the South-West of England were up by 9% annually. The region registered the fastest rental growth in Q3 of 2021. Rents in Purbeck in Dorset were up by 16.2% annually, making it the location with the highest rate of rental growth.

Nationwide, demand has continuously outstripped supply which has put an upward pressure on rents. Rental demand is expected to remain higher than supply with the availability of properties to let currently 43% below the five-year average.

Rents in London are starting to climb as people return to offices, with annual price growth of 1.6% recorded in the latest report, compared with falls of nearly 10% at the start of the year. Zoopla forecasts rental growth to be at 3.5% at the end of 2022.

In the UK’s other major cities, the swing back to the city centres is clear. As seen in the chart below, rental demand in the central zones of each city is at least double that in comparison to Q1 this year. 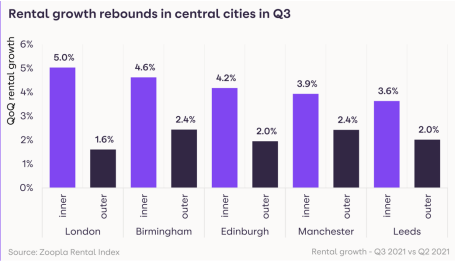 Grainne Gilmore, the head of research at Zoopla, said: “The swing back of demand into city centres, including London, has underpinned another rise in quarter three especially as the supply of rental property remains tight.”

She added: “Meanwhile, just as in the sales market, there is still a cohort of renters looking for properties offering more space, or a more rural or coastal location."

With rental prices growing significantly in Q3 this year, and tenant demand not showing any signs of wavering soon – now would be a great time for property investment. If you would like to know more about the current position of the property market or alternatively, if you would like to know what off-market opportunities we have available, contact us today!